TNI puts a lot of effort into ensuring it acts internally in ways consistent with its values, and improving its accountability.

In line with TNI’s vision and values, we are an equal opportunities employer with a strict policy of non-discrimination and strive for as much diversity as possible within the organization. Twenty-two nationalities are represented among our total complement of 55 staff, which includes payroll, external staff, interns and volunteers. Monthly staff meetings are held where news is exchanged, and consultations on policy are held. Separate staff meetings are held in Myanmar for the staff based there. 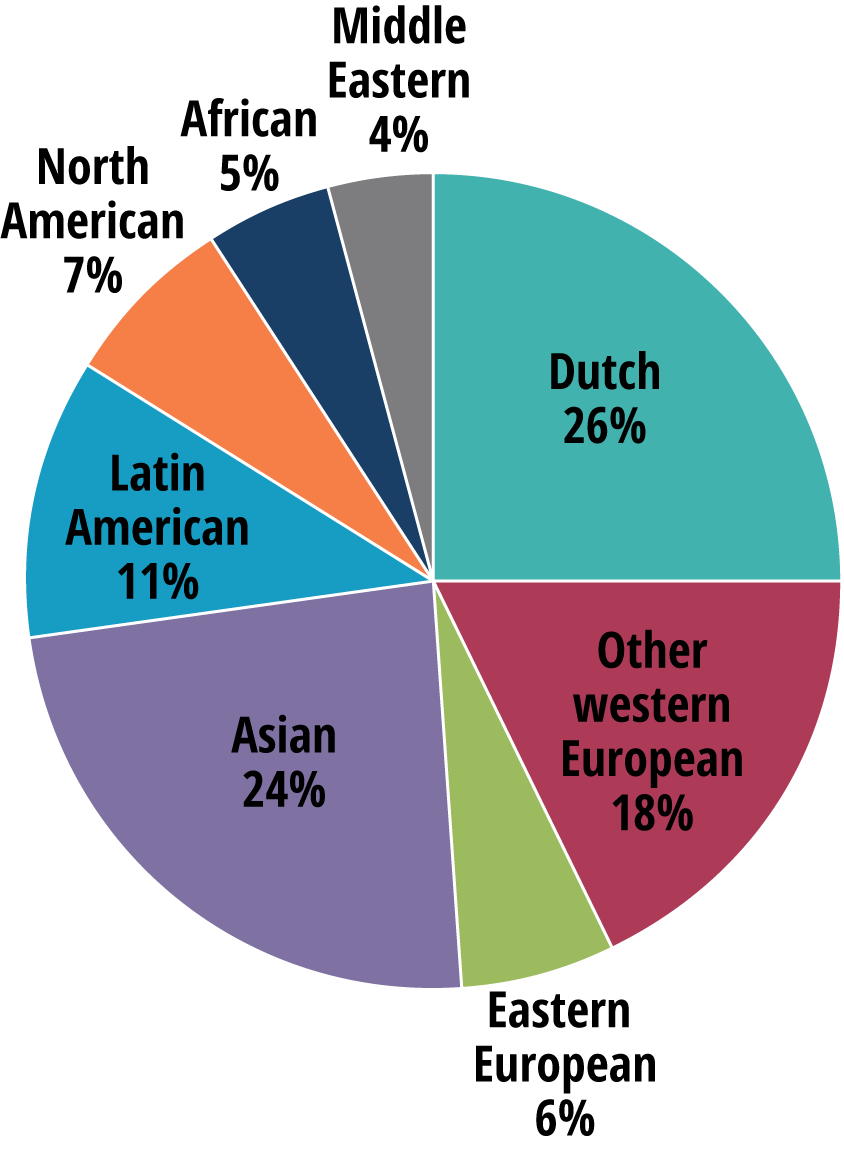 The same proportions apply in respect of management / non-management responsibilities 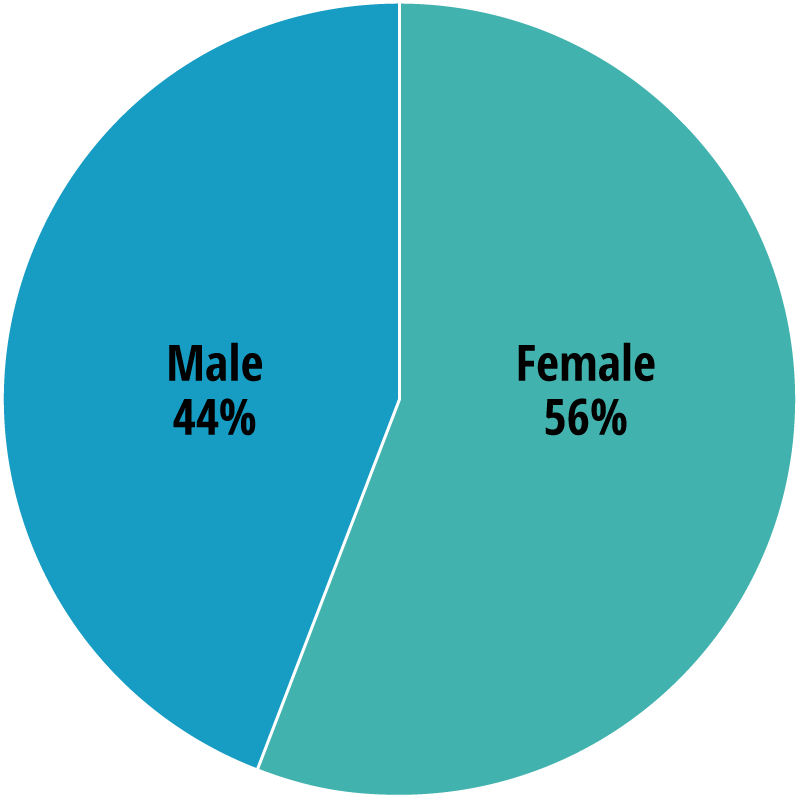 Consistent with our vision and values, TNI’s internal organisational culture is non-hierarchical and highly consultative. As far as possible, decisions are taken through a process of consensus-building. While most staff are expected to be self-steering, there are also clear lines of accountability and recognition of the authority of the team leader to make final decisions. The organogram is set for each five-year cycle, being reviewed as necessary.

By the end of 2019, the foundation had 25,29 full time equivalent (FTE) employees (in 2018: 24,79) on the payroll. The average number of FTE over the year was 25,60 compared to 25,40 the previous year — representing an increase of 0,2 FTE. At the end of the year, these figures represented 28 individuals. There were no resignations in 2019. One staff member was medically boarded part-time, with every effort made to support his recovery and gradual reintegration into the workplace on a full-time basis.

TNI uses as its guideline the Collective Bargaining Agreement (CAO) for the Care and Welfare Sector in The Netherlands. Staff receive an incremental increase for each year of service. In addition, and in line with the CAO, staff were awarded a one-off payment in January 2019, and a salary increase in July 2019. The ratio of the highest:median salary was 2,2 and the highest:lowest was 3,4. These figures do not take account of years of service or income tax differentials, which would bring the ratio down.

There is a training budget set at 1% of the personnel budget, and guided by a training policy. 15 staff benefited from training courses in 2019 at a cost of Euro 9,853. These included data security and safe communications, foreign language skills (Spanish and French), graphic design, campaigning, writing, research grant writing, first response (medical emergencies), mindfulness, and gender/power sensitivity training. In addition, an in-house skills share was run on English writing, and  weekly lunch-time accelerator sessions were introduced for self-education purposes.

Work began on the development of new Disciplinary and Grievance policies and procedures, which shall be finalized in early 2020.

TNI had 2 volunteers in the course of 2019, and welcomed 8 interns hailing from China, USA, Germany, Spain, Bulgaria, UK and Netherlands. Most were students at Dutch universities. They are paid an honorarium in line with Dutch norms.

In addition, we continued to host visiting scholar, Siobhan Airey, based at TNI since 2018 while undertaking post-doctoral research on finance for development from a legal perspective and supported by a Caroline Fellowship from the Irish Research Council.

TNI is registered as an employer only in The Netherlands and Belgium. Staff located in other countries are employed on freelance contracts. These staff are treated equally with payroll staff, with their salaries pegged to TNI salary policy and compensation for social security and pension contributions built into the calculations, adjusted for domestic tax rates and costs of living. In 2019, TNI employed 17 dedicated freelance staff in 2019 across the world, located in Brazil, India, Morocco, USA, UK, Spain (3) and Myanmar (8). Very sadly, one of our Myanmar team, Thura Myint Lwin, passed away in 2019 following a long illness.

A further 19 people were contracted for specific work in the course of 2019, including in Myanmar, Indonesia, Bolivia, Chile, Argentina, Denmark, Belgium, Netherlands, Spain, UK, and Bulgaria.

A total of 74 people were contracted to work for TNI in various capacities and under various conditions in 2019.

In addition, TNI serves as the fiscal sponsor for four projects, for which staff are also contracted. These are:

TNI strives to establish and uphold ethical standards within its organization. Work began in 2019 on reviewing and updating TNI’s Integrity Policies, which includes a longstanding policy on sexual harassment. New policies under development include a Whistle-Blower Policy and a Code of Conduct. These will be finalized in early 2020.

No inappropriate behaviour, misconduct or any other breaches of TNI’s integrity policies were reported in 2019. No complaints were received on the basis of the Complaints Policy published on the TNI website.

TNI owns its office building, originally built in the 19th century as a school. It is zoned for cultural and educational purposes by the City Council.

TNI strives to attract tenants which share TNI’s vision and values. In 2019, it housed:

One of the non-profit human rights law organizations vacated their office in early 2019. An existing tenant is interested to expand and discussions are underway about a reshuffle of office spaces without having to seek new tenants. TNI did, however, suffer a loss on expected rental income in 2019.

TNI is committed to upholding environmental standards and contributing to a just transition to more sustainable economies. We strive to do this in our conduct as an organisation as well as in seeking the structural change we believe necessary through our programmes.

Up to the end of 2019, solar panels installed on the roof of our building in mid-2016 have enabled us to save 22 tons of CO2 and have generated 31,362 KwH of solar energy, providing the anticipated third of our electricity needs annually. The balance is sourced from wind energy supplied by local farmers. In 2019, we replaced all lighting with LED, following analysis that lighting is the single biggest contributor to our electricity consumption. Having insulated the back side of the building some years ago, in 2019 we also insulated windows on the front of the building which effort we hope will show a reduction in gas consumption in 2020.

TNI follows its Procurement Policy, which privileges small suppliers that share our values, with this being the primary criterion used in procuring supplies and (technical) services. This includes demonstrable commitments to ecological sustainability, fair trade practices and cooperative ownership structures.

Some examples of how TNI puts its values into practice in this regard, include:

There were no procurements over Euro 30.000 in 2019 that would require tender processes.