The governance structure of TNI is set up as follows:

The structure is set out below: 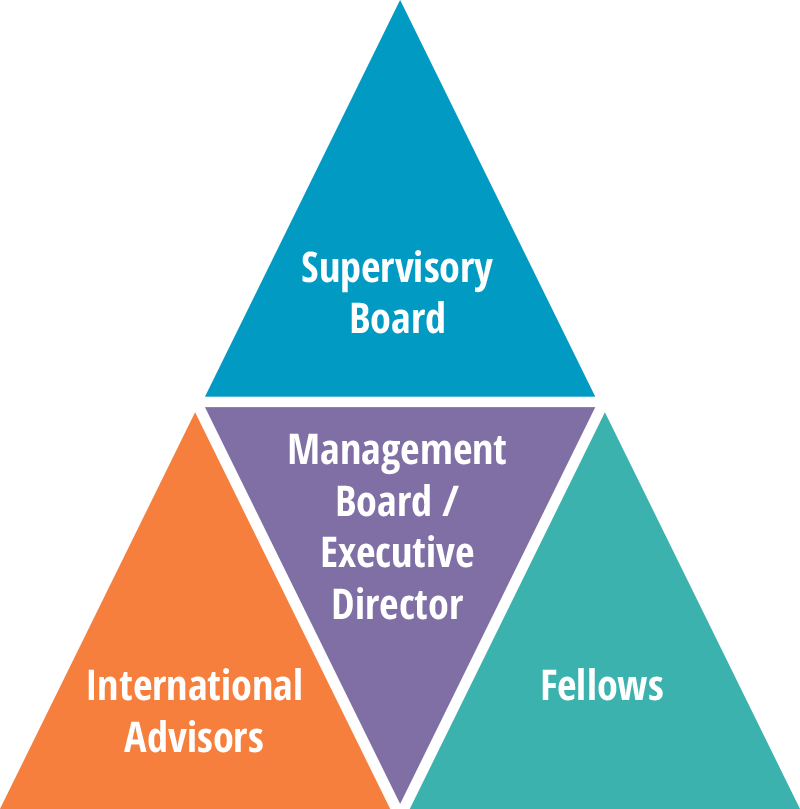 TNI strives to ensure that each of these organs reflects TNI’s international composition, orientation and ambitions, with due consideration for gender.

Composition of the Supervisory Board

The Supervisory Board is selected on the basis of the criteria laid down in the by-laws, and profiles which are regularly reviewed and revised. A committee – comprised of one Supervisory Board member, one staff member (usually the Executive Director), and one fellow – interviews candidates and makes a recommendation to the Supervisory Board, which makes the final decision.

Susan George has served as President of TNI, an honorary position, since 2015.

The composition of the Supervisory Board in 2021 was as follows:

In 2021, one new member of the Supervisory Board was appointed  and a search was conducted for a new member to be appointed in 2022.

Composition of the Management Board

The Management Board consists of one person, the Executive Director, Fiona Dove. The following staff report directly to her: the Personnel Officer, Programme Directors,  Communication Coordinator, Evaluation Officer and Community Builder.

The leadership expected from the Executive Director is to provide vision and to help staff think strategically. She is supported in the daily management by a Management Team, comprised of the Personnel Officer, a Programme Director, a Project Coordinator and the Communication Coordinator, which meets weekly.

The Supervisory Board determines the remuneration of the Executive Director. The remuneration complies with both the guidelines of the Dutch charity association (Goede Doelen Nederland) as well as those of the Dutch Government (Wet Normering Topinkomens).

Remuneration of the Executive Director (in Euros):

Composition of the International Fellowship

As laid down in the Institute’s by-laws, Fellows serve a four-year term, renewable once. Former Fellows join the ranks of TNI Associates, which may also include other researchers and scholars who make substantial ongoing contributions to the TNI community. Together, they have constituted the ‘think tank’ dimension of TNI. The current Fellowship expired at the end of 2020, following a one year extension on the maximum terms of office for Fellows.

No new appointments have been made pending the outcome of an extensive strategic planning process, which included reconceptualising the nature and role of Fellows and Associates. Final conclusions are only expected in 2022, with a view to implementation in the second half of that year.

Composition of the International Advisory Board

The International Advisory Board, and its composition, is also under consideration pending the outcome of the strategic planning process. It was not operational in 2021.

TNI’s internal organisational culture is highly consultative. As far as possible, decisions are taken through a process of consensus-building. While most staff are expected to be self-steering, there are also clear lines of accountability and recognition of the authority of the team leader to make final decisions. There is no hierarchy with respect to public representation: all staff are encouraged to accept public speaking engagements, and to engage with the media.

A total of 74 people were contracted to work for TNI in various capacities and under various conditions in 2021.

In 2021, one staff member resigned. Two staff members were on long-term sick leave, with every effort made to support their recovery and gradual reintegration into the workplace on a full-time basis. We saw somewhat of a baby boom in this second Covid-19 year, with three babies born to staff members. Two other staff took unpaid parental leave.

TNI uses as its guideline the Collective Bargaining Agreement (CAO) for the Care and Welfare Sector in The Netherlands. Staff receive an incremental increase for each year of service. In addition, and in line with the CAO, staff were awarded a 2.5% salary increase effective from 1 December 2021. The ratio of the highest:median salary was 1.94 and the highest:lowest was 3.22 (on the basis of full-time equivalent). These figures do not take account of years of service or income tax differentials, which would bring down the ratio.

According to the 2021 benchmark of Partos, the umbrella body for non-governmental organisations operating within the development cooperation sector, TNI salaries are within the norm for the sector.

There is a training budget set at 1% of the personnel budget, and guided by a training policy. 11 staff benefited from training courses in 2021 at a cost of €3,935. These included courses on legacy fundraising, social fundraising, EU fundraising, online facilitation, online investigations, hope-based communications and emergency medical assistance. In addition, in-house collective training took place on digital security, and weekly lunch-time accelerator sessions were self-organised by staff for self-education purposes.

TNI had 4 volunteers in the course of 2021, and welcomed 8 interns hailing from Germany (3), Italy, France, UK, USA and Indonesia. Most were students at Dutch universities. They are paid an honorarium in line with Dutch norms.

TNI is registered as an employer only in The Netherlands and Belgium. Where staff members are located in other countries, they are employed on freelance contracts and expected to pay their own taxes and make provisions for their own social security. They are treated equally with payroll staff, with their salaries pegged to TNI’s salary policy and compensation for taxes, social security and pension contributions built into the calculations, adjusted for domestic tax rates and costs of living. In 2021, TNI contracted 15 such staff, located in Brazil, UK (2), Spain (2) and Myanmar (10).

A further 32 people were contracted on a consultancy basis for specific deliverables in the course of 2021, including in Egypt, Lebanon, Tunisia (2), Morocco (2), Mali, Myanmar, Indonesia, India, Bolivia, Argentina (2), Colombia, Germany (2), Denmark, Netherlands (10), Spain, UK (3), USA (2). They set their own fees and are responsible for paying their own taxes.

In addition, TNI serves as the fiscal sponsor for three projects where staff members are contracted by TNI. These are: